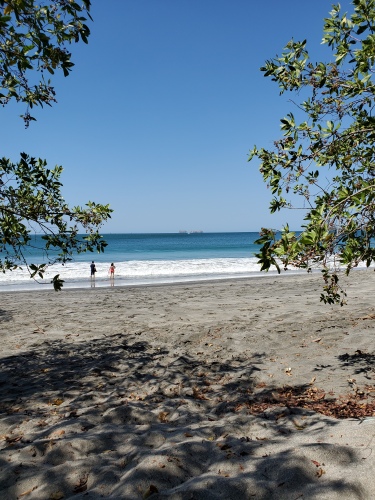 We (Karl, Guiselle, Sue, and I) decided to go the beach Sunday morning(ish). We packed all the necessities into a cooler. Beer, ice, beer, water, beer, snacks, towels, sunscreen, etc. and headed off to a beach called Playa Prieta (the dark beach). We all piled into Karl’s car and drove through town and up a road that began to climb up a large hill. It had a steep drop on the beachside of the road.  We came to a space in the guardrail and what looked like a very wide gully wash. Guiselle said, “Turn here” and we trundled down a steep rutted dirt path.  At the bottom, we found a gorgeous beach.

We hopped out of the car, found a nice shady spot and settled in. After a while, Sue and I decided to go in for a swim. We waded out until the water was about chest high and started body surfing the waves. The waves were in the 1-3 foot swell category and we were having a grand old time. We saw a perfect wave approaching and got ready to body surf it. There is some disagreement between Sue and I over the height of the wave. I think it was approximately 80 feet tall, Sue says 3. (Sue is correct.)  I assume you understand that I was correct. Either way, we rode the wave –Sue successfully, me not so much. I mistimed my swim and was ahead of the crashing wave.  It landed right on top of me and used my body like a basketball against the bottom. I stood up right away and thought, wow, that one hurt a bit, but no big deal. Until I tried to breathe. Guys: I had the same feeling we get when that girl knees us in the balls after we say that thing to them that they don’t like. Only it wouldn’t stop. I was hunched over in knee-deep water and told Sue that I needed a bit of help. We walked back to the blanket and I lay down wheezing like an even older man than I am.

I figured it would ease up if I just relaxed and allowed my breathing to calm down. After about 10 minutes it was clear to me that wasn’t going to happen. We piled back into the car and went to the local hospital. Which is, of course, closed on Sunday–I guess because no one ever gets hurt in church. Karl and Guiselle quickly figured out where that the nearest 24/7 hospital was (about 3 km away), and we headed there. By now I was really very uncomfortable; I could breathe and didn’t feel dizzy or faint, but I could not seem to get enough breath to catch up.

The hospital staff was great. They got me on a gurney, hooked up the oxygen, gave me an IV and then started to ask about what had happened, my details and my medical history. All in perfect English. They explained everything to me first, then to Sue and then to Karl and Guiselle (in Spanish) so that nothing was lost. Once my oxygen level was stabilized, they took x-rays of my back and neck. (Yes, Phil, they did find a spine despite what you have been saying all these years). They quickly ruled out any broken bones and diagnosed that my muscles were just very inflamed and were locked in spasms. The spasms were causing me to be unable to expand my lungs.

They gave me a muscle relaxant, some Valium and told me to rest. After about 45 minutes, Dr. Oscar came and explained that he spoke to the clinical director and they were a little concerned that there could be bruising on my lungs. While they thought it was unlikely, they recommended that we have a CT scan, however, their hospital did not have one and the nearest one was in Liberia about an hour away.  We (Sue and I) discussed the low probability of the bruise and the potential problems that would occur if the bruise started to cause problems when we did not have access to a CT scan locally. (Also, Karl had called 911 when the hospital was closed and was told, “I don’t know that area,” so that did not inspire confidence in case of breathing emergency.) I thought to myself, the reason I have experts in my life is to rely on their opinion, and while it would mean a two–hour roundtrip in an ambulance and missing the Super Bowl, we decided it was the wisest course.

The hospital provided the ambulance and a very kind nurse practitioner (Sofia) for the trip. The clinical director was already at the hospital in Liberia.  When we arrived, she met us at the ambulance, dealt directly with the medical staff in the Liberia hospital (who, by the way, all spoke perfect English).  Because it was Sunday night, the usual wait time for a CT report is 2-4 hours, but she arranged with the pulmonologist that she would video the CT scan and he would read it immediately so that if there was nothing wrong, we could get back on the road without wasting too much time.

There was much good news. First, the CT scan was fine, second, and just as importantly, I was able to stream the Super Bowl on my phone during the return trip ;-).

All in, a busy first day of the trip.

First, of course, to my wonderful, brilliant, calm under pressure and clearheaded wife. (You’re welcome, husband.) She took control, knew when to ask me if I needed anything, dealt with all the paperwork–apparently my birthday is May 30, 2020, (OK, so I was a little worried) just so you know  😉

Second to our fabulous hosts Karl and Guiselle, who got us to the hospital, made sure all the translations came through and even made us dinner when we got home at 9 p.m.

Third, Dr. Oscar and all the medical staff at the BeachSide Clinic.  They were just fabulous.  They patiently explained everything at least 3 times (to me and Sue in English and to Karl and Guiselle in Spanish). They were attentive and kind. When I was uncomfortable, they had three guys come and move me about 3 inches, but only after explaining exactly who was doing what and with Dr. Oscar watching just in case. They were so kind in fact, that when we were leaving the Liberia hospital, the clinical director asked Sue if we wanted to stop for dinner as we had not eaten that day.

Fourth, the hospital staff in Liberia, all of whom were patient and explained everything to me in English and made sure I knew what was happening and when it was going to happen.

Getting hurt in a foreign country is scary –especially one where you do not speak the language, but the care I received was just amazing, both medically and personally.

Uncle David–Sorry if I got any of the medical stuff wrong.