We woke up after a good night’s sleep for Steven, finally. I always sleep well, but this is a big deal especially with his muscles aching. Our hotel comes with breakfast, so I ran down to get coffee. The staff is so kind. The waiter/all-around helper, Coca, brought the coffee upstairs for me on a tray.

When we were ready, we went outside and had a delicious, French-inspired breakfast while taking in the view of the Pacific and a big iguana. Ah, this is the life. Oh wait, I meant Pura Vida! 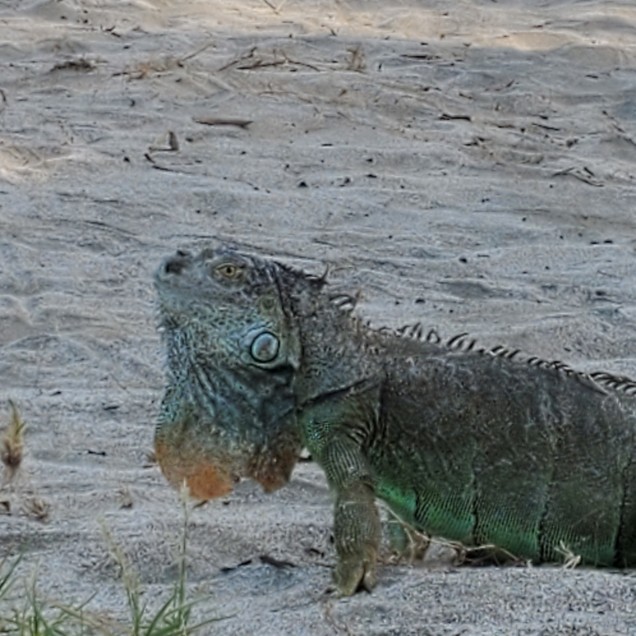 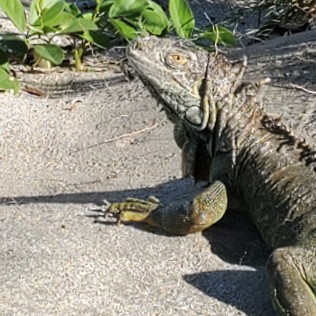 We took a long walk on the beach and ended up at an outdoor market/Chicagoesque summer fair. We don’t really need any souvenirs since we already have Costa Rica fridge magnets from our last trip, but we did get some coffee and chocolate grown and made by an American who is from the original hippy generation. A vegan who, with his wife, grows cacao and spices that the sell in the market. He did tell us how not eating dairy wouldn’t show right away, but it would pay off in the long run. He proudly announced that he was 72. I didn’t want to say anything, but I would have guessed 75. So much for veganism when you have spent 40 years in the sun.

We also bought a couple of water apples, which I had never heard of, but which have the texture of an apple but a more subtle flavor and one big pit in the center.

We were chilling on the deck, when we heard that Guiselle and Karl wanted to come over. Excellent! We hung out by the ocean and then luxuriated by the pool before they got hungry. We ended up at Wine & Soul. a wine and tapas bar that was just opening. It seems like lunch places close by 3, but dinner places don’t really open until 5, and we were in that in-between time. We got their just as it was opening, but we didn’t mind waiting. The owner, from Normandy, was very kind and we had a delicious lunch and bottle of Pinot Grigio. Plus, we saw monkeys! First time this trip. After saying goodbye and thanks again to our fabulous hosts, we lounged so more and got ready for dinner. We went to the tiny restaurant Steven mentioned yesterday, Antichi Sapori, where we had delicious plates of gnocchi and were served by the very enthusiastic and very busy owner, who hails from Sicily. His wife does all the cooking and they work nonstop during high season and then return to Sicily to recharge.

We are sad to be heading back to the snow (Sue is sad, I am on the verge of “accidentally” missing the plane and just staying here until the next one leaves… in May).

As an aside: We are not surprised to learn that Tamarindo’s knickname is Tamagringo. As I said yesterday, this is the English-speaking capital of Costa Rica. Beautiful, but very touristy.