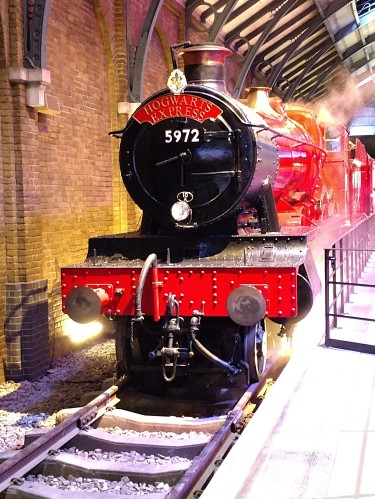 ow! I thought I would enjoy the Warner Bros. Harry Potter Studio Tour, but it was great. I like Harry Potter, but I don’t LIKE Harry Potter. The behind-the-scenes looks at costumes, design, sets, animatronics, special effects, props, and scenery would be fascinating to anyone interested in movie-making. The Harry Potter movies were lovingly and painstakingly created, which makes it all the better. We took the Tube to the National Rail to a special Harry Potter shuttle. All went smoothly. The average group takes about 3 hours to go through the whole exhibit and we hit that just about right. If you like movies or Harry Potter, this will be a treat.

We didn’t want Butterbeer or Butterbeer ice cream or really any of the snack bar food available, so instead, we went to Kensington and had Indian at Dishoom. I was a little nervous because it’s a chain, but it’s a chain with great reviews and they are warranted. My nephew had never really eaten Indian before. We had okra fries and vegetable samos

as, which disappeared pronto. I recommended chicken tikki and when I looked down at his plate after a few minutes, it was gone. He wants to go back. I am a dairy free vegetarian, which left out their specialty of black daal, but the bhel starter and the chanan chaat salad were delicious.

Next, we headed out to Kensington Garden and Hyde Park. I know you won’t believe this, but it was 75 degrees and sunny. Amaz 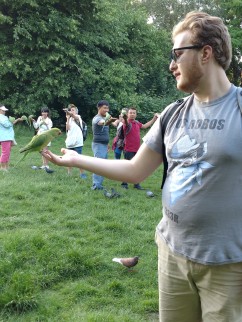 ing, although one of the Warner Bros. employees told me this was “moaning weather” for the English. She claimed it was hot and humid. Hmmmm. I say it was lovely. Lovely is one of my two new favorite words. The other is posh. We watched the Queen’s swans, and ducks, and pigeons. Then we wandered. And we wandered right into a lot of people with parakeets on their arms. They were holding peanuts and the birds would alight on their arms to eat. We each took a turn so the other could take pictures. It really does pay to wander without purpose sometimes. We ended up walking the 3 miles back to the flat. Along the way, we noticed that Saturday night on Edgware Road seems to be hookah night. The street is loaded with Lebanese restaurants and almost every one of them had outdoor seating with hookah service. I don’t know what the attraction is, but I am obviously out of the know.