It’s a tough life when you have to work in the sunshine while looking at palm trees, but that is what we did day. That is until about 5 p.m. when we decided it was time to walk on the beach and have an Imperial while we watched the sunset. I am Steven’s driver and nurse, but it’s really not a bad gig. He is only a semi-whiny patient and I am adding up all he owes me while I am the patient, caring wife.

Steven is doing much better. He has run out of the good meds (read pain killers) and started taking Advil BUT, he was definitely keen on my running to the farmacia for more muscle relaxants. Did you know you can get muscle relaxants over-the-counter in Costa Rica? Maybe I should have asked for the opiods. Ha. No way. I just read “Dreamland” by Sam Quinones about the opiod and heroin epidemic. You can, however, just ask for the muscle relaxants .(Conrelax anyone? I don’t know what’s in it, but Steven’s aching muscles seem to like it a lot.) 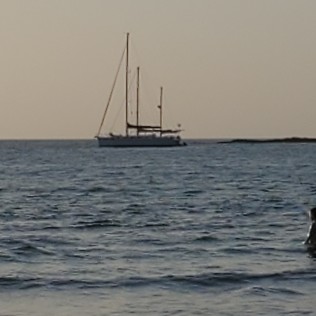 We went back to the beach where we walked yesterday, because why not? It’s convenient, the parking is easy and free, and we can sit at Las Brisas, have a beer in the shade and just chill. I can’t comment on the food, but the chips were crispy and the company was good 🙂

Karl had also warned us about the “watchy” or “watchee” (or “watchie”) who is the guy who tells you where to park and then offers to watch your car so nothing terrible happens like an accidental break-in. The watchee (my preferred spelling) came out after we had parked a few meters away and I waved him off. Oddly, the car was parked just where we left it and was unmolested.

At least we were going to sit by the pool right after I had a surfing lesson.  I signed up for a 10am lesson through Surf & Yoga in Kihei…about 10 mins away…2 hour lesson, then right to the pool.  The lesson was great!  Eddie, my instructor, had me up after only about 10 minutes and then I rode 15-20 foot…ok, only 3-5 foot…but 15-20 sounds much better..waves for then next 110 minutes.  I videoed a bunch and Eddie videoed me a few times, some or all will be posted soon. Ms. seasick over here did not surf, but I did walk along the beach and marvel at the ocean. Aaaaaaaah.

I was really hungry after two hours in the water so we decided to stop on the way back to the hotel at the Maui Brewing Company, which wasn’t far from where I had my surfing lesson..and after all we were hungry and right afterwards, we would go to the pool.  We had a couple of beers and fabulous food (I had chicken wings followed by a burger with mushrooms and smoked gouda.  Sue had avacado toast and really interesting veggie burger. It had macadamia nuts. Yum.) I felt that I should double down on the meat as I think my belly is still recovering from the fake chicken from a few days ago.

Once we finished lunch, we were about to head to the pool, when I mentioned that Eddie (remember Eddie, he was my surfing instructor) had told me about a really nice little hike about 10 minutes away from the hotel.  (More like 10 miles on another not-quite-two-lane road.) It

was called the Hoapili Trail and is through lava fields.  What a great walk.  It isn’t very long (which none of the hikes on Maui are) but it was incredible. Rust red to pitch black rocks roll right into the ocean, which then carves blow holes and rock ridges.  I have a bunch of videos, which are just amazing.

After we finished that hike, we returned to the hotel and it was too late for pool-sitting, so we had a drink on our balcony.  Today was our first sunny day, so we scrambled down to the western edge of the hotel property and snagged a nice spot to watch a spectacular sunset.

Following the sunset we went to get

dinner nearby and unanimously voted on ice cream (read: sorbet for Sue) for dinner. Yum!  We took our after dinner ramble up a little street that leads away from the hotel that we called the enchanted forest (and Google calls unnamed road).