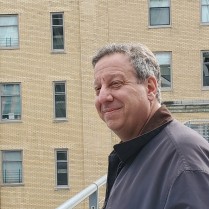 It is Monday late afternoon—and if you are from the company I work for—it is after 5 p.m. I am sure. We arrived in New York on Saturday morning after another early morning flight. Every time we book a flight at 7 a.m., I think it will be fine. Just get up early one day and then we will have the whole day to spend in the city. But then the day of the flight comes and we have to get up at the crack ass of dawn and I curse Sue for letting me book an early morning flight. So what did we learn here? That is right—it is all Sue’s fault.

Anyway, we got to the Park South Hotel at about 10:30 a.m. and asked to drop our luggage. Much to our surprise, our room was ready so we checked right in. After a quick unpack and a deep breath, we set out on our way with no particular destination in mind. We wandered down 5th and around and about and stopped in for our first NYC food break—pizza! Afterward, we found our way to Madison Square Park and the National Museum of Mathematics. We were very disappointed to realize that it was a museum for kids. Bummer. We quickly checked the google and re-routed ourselves to the Whitney Museum. It was a bit of a hike, but 1.5 miles and a pretty chilly 45 minutes later we were in line. Steven forgot to mention my favorite thing: We got in free! A man with a corporate account had two extra tickets. Bonus for us.

The Whitney was great. In addition to their usual collection, they had an exhibition of Diego Rivera and others who were influenced by his murals. It was wonderful. We spent a couple of hours wandering through and then headed out. We walked north on the High Line all the way to 30th street and then straight across Manhattan.

We had dinner at an Indian place around the corner (don’t eat Indian food in NYC unless you like it bland. Every time I do it, I am disappointed. The food was good, but not at all spicy.) and ended the evening with a 9:30 show by George Coleman at the Jazz Standard club which is right behind the hotel. Mr. Coleman is a not-so-spry 84 years old. In fact, he needed to be walked onto stage by a helper and there were times that I thought he might fall off his chair. He has clearly lost some of his skills, but his band did their best to make up for his shortcomings. Decent show, but barely an hour and I was really hoping for more. Oh well.

Sunday was another chilly day, but us being us, we didn’t let it get in our way. Once again we laced up our boots and started our journey by grabbing a bagel and schmear at Bagel and Schmear which is next door to our hotel. Yum! Great bagels. We headed downtown to the Tenement Museum on Orchard Street. Very interesting. It is less of a museum and more of a guided tour of a tenement building that includes the history of the residents/businesses in the building. We enjoyed it, but it isn’t something I think I would do again.

We headed west on Delancy on one of our pie in the sky/it seems like good fun searches. I read on Atlas Obscura about a small piece of Manhattan called Hess’s Triangle that the city tried to buy and the owner fought tooth and nail for years not to give up. It is now a small triangle in the middle of the sidewalk on Christopher Street and is still privately owned. Bear in mind it was about 1.5 miles to get from the tenement museum to Christopher Street, solely to take a photo.

We headed back north towards the hotel and realized that we were a bit hungry and in need of a small sit down. We found a bakery just off Washington Square Park that had hamantashen. These were not your usual hamantashen, no poppy seeds and raspberry jelly to be found anywhere. We had six between us. Three halva, two apple and one chocolate. A perfect break. Once we finished, we headed back to the hotel and were back in time for Happy Hour.

For dinner, we headed to midtown to see my Uncle David & Aunt Marcella. We hopped the 6 train up to 59th and walked a couple of blocks to their apartment. We had dinner a very nice French restaurant called Match 65 a few blocks away. It was a great evening full of interesting conversation and great food.