Who doesn’t love their dog? Rosie has been part of the family for 9 of her 10 years. She’s a little (little is not a word we should be using with Rosie – in any context) crazy in a German shepherd way, but she’s loyal and she gets me out of the house even when it is -5 degrees outside. The biggest problems with dear, sweet Rosie is that she doesn’t get along with other dogs and has never spent a night anywhere but our house since we got her. This makes travel, which I finally am more free to do, difficult. I can’t leave her in a kennel or with a dog-sitter who has other dogs.

I am happy to say that my son has a life and although he can help me out some of the time, he can’t do it every time I think I want to take a break. A few weeks ago, I couldn’t take the weather or the few-block radius that I live in when I hunker down. I had the brilliant idea of a weekend staycation. I looked for hotels and events and then … I remembered we have a dog! That was the end of the staycation. 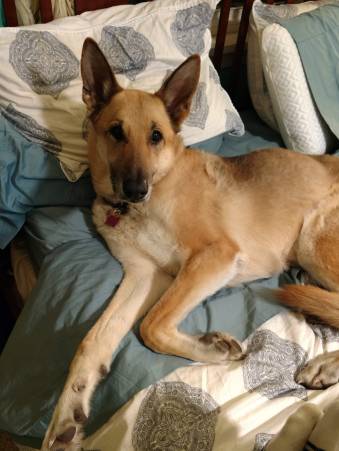 I have even toyed with the idea of finding a cabin that accepts pets, but Rosie is a 75-pound, barking pet with a nervous stomach, so I am reluctant to try it in case it’s a disaster. Besides, it reminds me of when I would travel with my son when he was little and I would spend many hours trapped in the hotel room for naps and bedtime. I would either have to take Rosie everywhere or leave her in her crate, where she only spends time if we’re having a party and there’s likely to be easily stolen food. Rosie needs a fenced-in yard because she’s outside, she’s inside, she’s outside, she’s inside (and that was just in the last 10 minutes). I can’t imagine her trapped in a small space without a door to whine out for outside access.

Plus, as you can see from the photo above, Rosie is used to making herself comfortable (on Steven’s side of the bed). I know I am a sucker, but I don’t think she’s suddenly going to turn into one of those dogs on an SUV commercial who hops out of the car ready to hike a mountain off her leash. Rosie would love the hike, but bark furiously at everything around her and try to chase every animal from a squirrel to a mountain lion if she encountered one. She’s 10 now, so she might not get very far, but she certainly would not stick valiantly to my side, trot a few paces and wait for me to catch up.

Pets are fabulous and I can’t imagine life without one, but she’s definitely put a crimp in my wanderlust.