The flights down were pretty much uneventful.  On Saturday, we flew Chicago–> Fort Lauderdale FL–> San Jose, Costa Rica.  We were scheduled to arrive at 7 p.m., but arrived about an hour late. No big deal.

We rented a Suzuki Vitara and were a bit surprised to realize it was a manual. Ok. I know how to drive those. It has been a few years, like about 20, but what the hell.  It is like a bicycle: You never forget (I hoped). We hopped in the car and headed on our way.  Google told us that that it was a 45-minute drive to the El Toledo Coffee Plantation in Atenas where were staying the first night. Our original plan was to use the offline google maps, but after about 30 seconds we realized that was not going to work. We turned on the data, got Google online and were now, as my mother used to say, cooking with gas (which I always found interesting because we had an electric oven when I was growing up). The road out of San Jose was pretty good, 2 or 4 lanes, nicely paved, reasonably well lit, speed limits of 80 Kph. I thought, wow, this is a breeze. After about 10 minutes, we turned off that road, onto a more local road. Once again, smaller, but pretty wide, and a bit winding, and pretty dark. We turned off that, onto a smaller road. At this point I want to point out that all the roads are in good condition; they are small, but nicely paved. The road was really 1-1.5 cars wide, but not a big deal. There weren’t too many cars on the road, the speed limit was 40 kph, but now it was very dark and had steep hills and hair pin turns.  I knew were in trouble when we were on a steep downslope around tight turns and Sue said, “Umm, yeah, it is going to get a bit curvy up ahead.” Eeek. We persevered. We drove through a village that was having a fiesta. It looked very nice, but people had parked on both sides of the 1.5 car wide road. Slow, careful going.

After about 40 minutes, the Google informed us that we needed to turn left. We looked and saw no place to do that. Then it rerouted us which would add about 20 minutes to the trip. Forget that I thought and looked for a place to do a u-turn. Easier said then done. After a few minutes, I found a place that wasn’t too bad, did a 17-point u-turn and headed back.I have to say that Steven did a damn fine job of driving even if it was a little hairy at times. Now Google was telling us to take a right. The turn was a bit hidden, but we found it and headed up the hill, which seemed like a 40% grade –I am sure it wasn’t, but it seemed it–and it was unpaved.  Luckily the Vitara is 4-wheel drive. The “road” had a number of houses on it, but we didn’t see anything that looked like a coffee plantation.  Hmm. … Finally, what was now a path ended. Yup, no coffee plantation. Luckily, we had their phone number. Ah, but no reception. It is dark, we are on top of a hill in a foreign country at 10 p.m. and totally lost.  Sue noticed a woman who had walked out of her house when we passed it and when to ask her directions. Using sign language and a bit of Spanish that she had picked up, Sue figured out that we needed to go down the hill.  We went 1/2 way down and found another house and some guys there told us that the plantation the next “road” over. We got back to the paved road, the sure enough, there was a sign that we had missed for the plantation. We pulled in an were met by the family that runs it  Whew.  We had arrived. 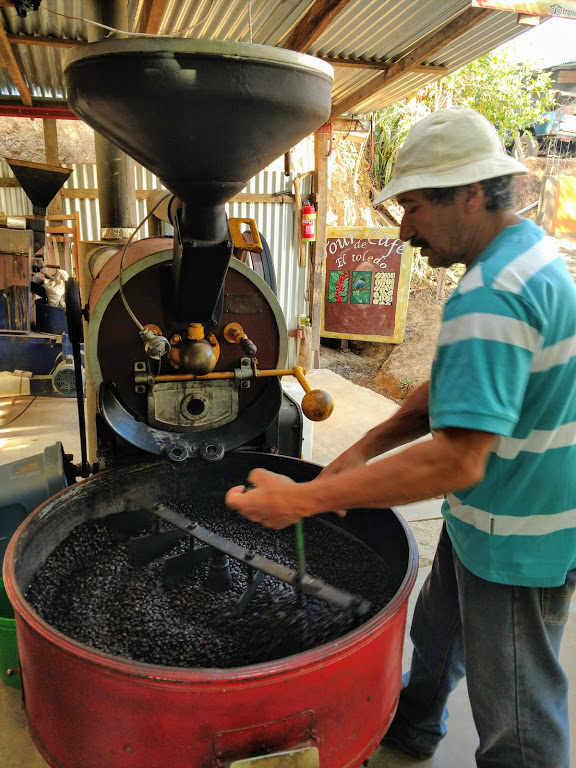 The family was very gracious, despite our late arrival. While He and his wife did not really speak English and my Spanish is rudimentary, their son Raul speaks excellent English. We had a delicious hot drink made with something like sugar cane (I wish I hadn’t been so tired or I would have written it down; bad former journalist!) and headed off to bed.

The accommodations were clean, but simple. No heat, and believe it or not it was chilly on the mountain, and not hot water. We slept soundly, though, except for the rooster. The view on the mountain is gorgeous and we were welcomed into the family home for breakfast. Their hospitality can’t be beat and the food was delicious. Typical Costa Rican food, which means plantains, rice and beans, an egg at breakfast, and maybe some cheese. After breakfast we got a private explanation of coffee roasting and it’s intricacies. Then we had some down time and got to meet a few other people who had stayed the night. Then on to the coffee tour itself, which was surprisingly booked.

Gabriel, one of the sons, did his best to convince us that coffee drinking wasn’t a responsible environmental choice. He really played devil’s advocate and got us thinking about the impact of coffee vs. food crops and whether organic was a meaningful and useful label to use to gauge whether or not to buy something. We tried light, medium, and dark roasts and Gabriel talked about taste buds and explained that, like wine, coffee taste depends on what you are drinking it with. Then, we headed for the farm to see how and where the coffee is grown, harvested and dried. My main takeaway is: Coffee farming on a small scale is hard work and an art.

This tour is well worth your time if you are going to be anywhere near the area. Not only will you be supporting local farming and a lovely family, but you will get to learn about and taste some very good coffee. I learned a lot. It was a great introduction to Costa Rica.

Please excuse errors & misspellings…we are writing this while at the pool bar watching the howler monkeys (maybe some photos & videos of that tomorrow)….

One thought on “A Warm Welcome to Costa Rica”