Last weekend I did my solo road trip to Pittsburgh, another stop in the grand tour of baseball stadiums. 500 miles each way, give or take a bit. I left around Friday noon, looking forward to a sunshine filled afternoon drive to Cleveland. Unfortunately, the weather gods decided to toy with me. It rained on and off, every 45 minutes to an hour, with intermittent sunshine along the way. Every time I stopped to put the top down, the clouds would roll back in and it would begin to rain. Finally, after 3 or 4 times raising and lowering the top, I gave up. Of course, it was then beautiful and sunny for the rest of the day’s drive.

I stayed overnight near the Cleveland airport, got up and did the quick 2.5-hour drive to Pittsburgh and arrived around lunch. The Steelers and the Pirates’ stadiums (stadia?) are in one section of town, and once Josh arrived, we wandered over there for lunch.  We found Jerome Bettis’ Grille 36 (not surprisingly it is near Heinz Field) and had a decent lunch.  The one weird/scary/funny thing about the place is that men’s room is separated from the bar area by a one-way mirror that starts about chest high and goes to the ceiling.  Yes, the mirror side is the side facing the bar, but still, it is somewhat weird to be in the bathroom and look out over the bar.

We went to PNC Park, the Pirates’ stadium, around 6 p.m. to get ready for the Cubs v. Bucs.  We had pretty cool seats.  They were behind home plate, front row on the second deck, above the safety netting.  The game itself was kind of dull. The teams were pitching their fourth and fifth starters, so we weren’t expecting a pitching duel.  The Bucs jumped out to a three-run lead in the second and then held on to win 3-1 behind 7 strong innings from their pitcher, Joe Musgrove.  All in all, it was an unexciting game, but they did have great beer (Souther Tier 2X IPA on draft) and excellent fireworks afterwards. 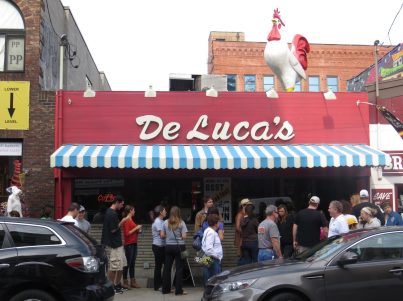 Sunday morning, we decided to go to Deluca’s Diner for brunch.  It is apparently a Pittsburgh tradition and I am pretty sure that the last time it was remodeled was during the Nixon Administration (maybe before that).  I valeted my car down the street and when the guy asked how long I would be; I replied, “Not sure, going to Deluca’s.”

We were done with brunch by noon and we both hit the road for home.  Josh had a 4 hour drive and mine was about 7.5.  The drive home was beautiful.  Sun was out almost the whole way and temperatures were in the mid-80s.  Perfect weather for driving with the top down.

We have hit the halfway point in the stadiums tour.

One thought on “The Stadium Tour Continues”