Well, thank you United for simultaneously getting us here on time and reminding me why I really don’t like flying the friendly skies. No power to juice my laptop, non-working earphone jack in the “entertainment” system (which I think is circa 1981 with channels for the different audio and continuously running movies–want to see the beginning of the film? Guess that start time), and unavailable personal electronics entertainment.  To add insult to injury, the coffee tasted burned and flavorless at the same time. Boy that cup of joe sunk below my meager expectations for airplane sustenance.

arrived at our AirBnB near St. John’s Wood without much distress and found that it is lovely, although the owner neglected to mention the 61 stairs we had to climb to get to it. My nephew promptly fell asleep, while I drank coffee, unpacked, showered, and found some very British telly to watch. A game show where you are given numbers and you have to do math calculations to end with a certain sum? Yeah, that would go over big in the States (I think it is called Countdown and the woman who used to do the math or as the Brits say maths, was Carol something or other).

Once Jake was awake and semi-conscious, we decided to head to the Sherlock Holmes Museum. Kind of a ripoff at 15 pounds a piece but fun to do since it was within walking distance. And I got a cool pic of me. Yes that’s me in the famous Sherlock Holmes hat that the amazing detective who never lived never wore.

Side note: Here’s a helpful hint if you are dragging your laptop with you: Make sure your converter is grounded. Mine wasn’t. Oops! We were passing a hardware store on our way to Baker Street, popped in, and got one for less than the prices I saw online. Plus, we met some friendly people.

For our first real meal here we had — surprise! — fish and chips at Hobson’s since it was on many best of lists and was close. A mile walk was about all we wanted.  I had matzo meal breading on plaice which I had never even heard of, but is firm, flat and moist; Jake had the classic battered cod. Both were delicious. I also ate mushy peas, because, well, funny British food. Plus, I had a soda called Fentiman’s Dandelion & Burdock. Don’t ask me what it really was, but it was pretty good if a bit sweet. The label was in English and Slovak, which we figured out with a little help from Google Translate. We finished the day with a walk just so we wouldn’t fall asleep to early. No time for jetlag.

All-in-all a good day, except that I wasn’t with Steven on his birthday. Happy birthday, Steven! (Thank you!  I am weeping into my COLD non-English beer because you are not here.) 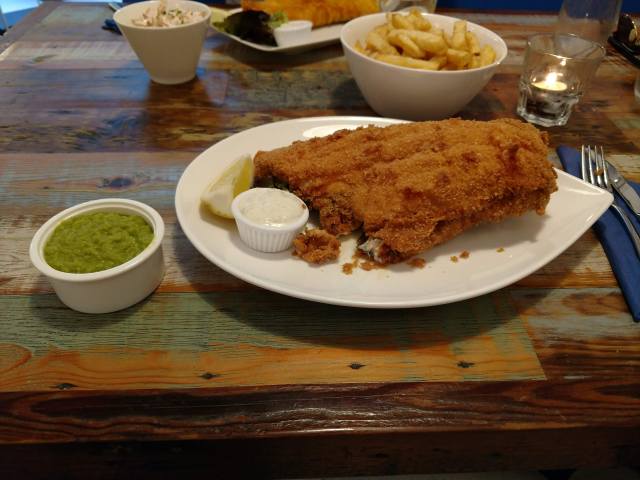