Our magic carpet for our road trips is a 2006 Saab 9-3 convertible with 120k miles on it. It is a joy to drive, especially in the wide open spaces with the top and windows rolled down.    It is fast, hugs the road and accelerates like a dream.  We love driving it.

I am always a bit nervous when we embark on a long road trip in the beast.  It has lots of miles, and it isn’t like there is a Saab repairman in every little town.  Last road trip we had a bit of an issue in Crofton, Nebraska (population 689).  The car was misfiring and losing power, so I called my mechanic back in Chicago and based on the call (which included many sound effects) he “diagnosed” the issue and provided the part number for the repair.  We stopped by the local mechanic (Mike) explained the situation.  He hopped right on the computer, located the part at the main Napa dealer and had it ordered in about 10 minutes.  Amazing, we needed a part for a 10 year old European built sports car from a defunct manufacturer and we got delivered to central nowhere Nebraska in half a day.  Mike informed us that he would pick it up from the Napa dealer in a next town over (Yankton, South Dakota – population 14,000), when he was there for previously scheduled appointment…and that he would “lollygag” around Yankton until the part was delivered.   He dutifully collected the part around one 1pm.  Well – so much for remote over the phone with sound effects diagnoses…That wasn’t the issue.  The car needed a new spark plug…So Michael replaced that and we were on the road just after 5pm. 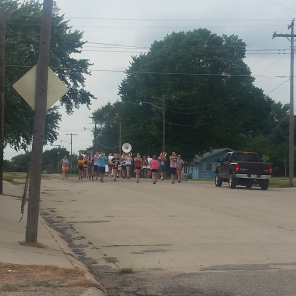 …a forced one day rest in Crofton, Nebraska, isn’t such a bad thing.  We wandered the town, Sue took photos and by sheer luck, we saw the school (elementary through high school) marching band practicing by marching right down Main Street in the middle of the day (yes…that is the main street).  Cars (and pick up trucks) pulled over to let them march by…You know the way it happens in every big city.

One thought on “Just an old fashioned Saab story”