No, we are not time lords (Susan should speak for herself; I am not willing to concede this point…yet), but we did go back in time last week. Anyone who lives in Chicago or who has ever been in Chicago in the summer knows that every weekend brings a new neighborhood festival. They are all pretty much the same (sorry fans of a specific one), some have more art, some more crafts, some a theme, but mostly they have street food, beer and wine, random stuff to buy, and music.

Last Saturday we headed to Taste of Lincoln and the 1970s. We were informed that we had to get there by 4:30 or we would miss the highlight … Dancing Queen–an Abba tribute band. Spandex and sequins and a little Fernando on the streets of Chicago. The scene was classic Chicago: all kinds of people coming together in the name of (bad) music. Not that the band was bad, but would my life be complete without ever having heard B sides of Swedish Abba hits sung by others? YES! 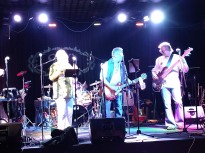 Yesterday (yes, I know I am a day late with the post), we went back to a time that I don’t remember: the ’60s (1969 to be exact!). We headed up the North Shore to 210 Live in Highwood. Steven says the place used to be a bowling alley, but now it is a restaurant and music venue. A friend of a friend was playing trumpet in a Woodstock and Joe Cocker tribute band. I’m all for the summer of love, but I hope these talented musicians aren’t stuck back there and that this is just a chill side gig. The funniest thing to me was that we heard a substitute Joe Cocker substitute. Chicago’s own Joe Cocker sub was unavailable, so Detroit’s Joe Cocker filled in. The whole thing reminded me of John Belushi (which I realize plants me firmly in the oldster demographic, too, just not quite as oldster. If I were young, I would have bee at Lolla.

One thought on “Does Time Travel Count?”