I know that I have said it before, but I love to drive.   Put me out on the open road with the top down, good music, good company, and an interesting destination, and I am as happy as can be.

During our trip out west, I noticed that lots of the highways have been named after people.  In southern Illinois there is Paul Simon Highway (route 55) which, as a true New Yorker (if you consider upstate natives to be true New Yorkers), momentarily puzzled me.  Why would they name a flat and boring highway after the ’60s (’70s, ’80s, ’90s, ’00s, ’10s) singer?

Granted, the bow tie logo sort of gave away that it was really named after the senator from the “great” state of Illinois.   I guess he must be famous because I found a photo of him with the real one 😉

Later in the trip, we saw many roads sponsored by various organizations (especially in Utah, but that could have been because we were on smaller roads).   I wondered what one had to do to sponsor a highway, so I looked it up.  Many states have a section of their highway department that deals with it, but some places subcontract the process to third parties (similar to baby brokers?) . 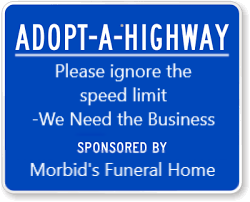 On one of the third party sites, I found that they charge between $600 (for a small road) to $10,000 (for a highway) per month for sponsorship.  I guess that is not unreasonable if you are a business and want to use it for marketing.  It appears that all you need to do is fill out a form, pay the money and they will put up your sign.   I couldn’t tell if they vet the organizations for propriety (and if they do, on what basis do they do it?).  Unfortunately for me, it is too expensive for my “waste money on foolishness” budget so I can only dream of the signs I would like to see.

One thought on “What is in a Name?”